Howdy Folks.. it's been a busier June than I expected hanging out down here in the steamy south of Ontario getting ready to head out on the road with "Uncle" Dan Henshall for our WAKE THE SLEEPING GIANT TOUR taking us from all the way down here in the Southwest to the Northwest, over Lake Superior and onto Winnipeg... the sweetcorn will only be knee-high when we take off on July 14th for our first show in London, we cross the escarpment's silver spine for shows in Kitchener, Oakville, Hamilton, Brantford, Port Stanley and Toronto before we start across the vast Precambrian Shield traversing the rugged north shore of Lake Superior, in Sudbury, Sault Ste Marie, Wawa, Marathon, Rossport, Thunder Bay, Atikokan, and Ear Falls..! All the dates and destinations are listed below...  We're playing at the Live From The Rock Festival in Red Rock, and the Trout Forest Music Festival in Ear Falls (100kms North of Hwy#17), and when we get to Winnipeg we'll be doing a few shows in town at Times Change(d) and Le Garage.  The trusty Jeep Cherokee won’t be tiptoeing past the trickster Nanabijou, the rocky giant that sleeps silently in the mighty Gitchee Gumee off the shore of Thunder Bay; we'll be raising a roots music ruckus along Highway #17 that shakes him to his stony feet to dance along…!
The tour starts in London with a ROOTS MUSIC REVUE unofficially kicking off the HOME COUNTY FOLK FESTIVAL at the APK Live on Thursday, July 14th.. we're rejoined by Toronto songster WILL GILLESPIE as well as London duo BETH PRYSNUK and GRAHAM NICHOLAS for a night of roots ruckus raisin'..!

Will and I are having a special T-SHIRT RELEASE PARTY at Grooves Records on Sunday, July 17th with a free in-store concert at 3pm... the T-Shirts look great ( they are all hand-screened by me!) and if you'd like to pre-order one, they are $20.00 if you'd like it delivered on our travels,  or $25.00 if you'd like it mailed to you directly.  Send your T-Shirt money in to our Kapipal Fund at http://www.kapipal.com/allisonbrowngasfund .
Tank tops are also available...! 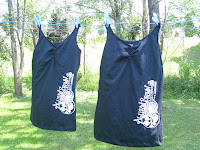