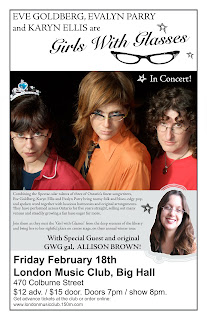 February greetings folks!  January had me hibernating after a great holiday touring with Ox and nesting down in the Souwesto homestead for a couple weeks.   Nice to take a breather from gigging to plan for a busy 2011..!
… my first show of the new year brings me to the exotic far East end of Toronto for a songwriter’s night at Feather’s Pub on February 12th featuring a whole night of sweet songsters on your Valentine’s weekend..
.. then I’m off to Stratford and London to be part of the GIRLS WITH GLASSES tour, doing special opening for spectacled songstresses Eve Goldberg, Karyn Ellis and Evalyn Parry; we’re at Foster’s Inn on Thursday, February 17th and Friday, February 18th at the London Music Club.  I’m playing a special afternoon show with some special guests including “Uncle” Dan Henshall on Sunday, February 20th as part of the Old East Studios Sunday Concert Series.. 2pm, $10.00.  I’m back in London again on March 5th at the LMC with Ambre McLean and Gabrielle Papillion..! 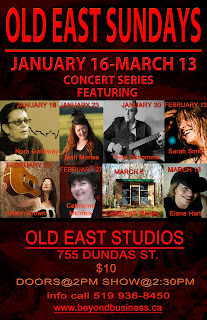 … in all this nesting time I’ve been working on a secret radio project that I’ve already told about a hundred people about, but not to worry the reveal will be coming soon to a radio or internet near you, stay tuned!  "Viper At The Virgin's Feet" has generated some excellent CBC airplay recently on "Here And Now" and was reviewed on No Depression!

I’m also still hanging out in Toronto looking for JOBS so if you hear about anything that would be up my alley let me know.  Soon enough though I’ll be back in my Jeep Cherokee hitting the road for an Ontario tour with Nancy Dutra and Willow Rutherford, (anyone in East or Southern O wants to do a house concert..?), and booking up August for a tour to Winnipeg and back enroute to the Live From The Rock Festival in Red Rock..!
Summer Dreams… Winter Sleeps…
See you sweeties in Toronto, Stratford and London this February!
Allison