… taking a late November breather from big-city livin’ back here at the ol ‘ Souwesto homestead for a couple of Windsor shows this weekend… Saturday, November 27th I’ll be LONESOME LEFTY’s  special guest at the FM Lounge (The Fish Market), show starts around 10pm and we’ll be passing around Lefty’s cowboy hat sometime during the show…

…. and on Sunday, November 28th at 3pm, I’ll be joining Wayne Bennett, Tim Swaddling, Lonesome Lefty & Friends along with the choir at the Sandwich First Baptist Church for a special gospel concert… make sure to have your Hallelujah on..!!!
… December 1st I’ll be sitting in as a special guest with Folkgrassers North Of Queen at Mitzi’s Sister, 9pm, PWYC partial proceeds to Autism Ontario…!

…….Just hear those sleigh bells jingling ring ring ring-a-ling bringing YOU to Mitzi’s Sister DECEMBER 12th  for an ol’ fashioned Snowflake Serenade Sunday evenin’ including “Uncle” Dan Henshall playing the part of Jack Frost (mandolin), Jeff Kahl as the Abominable Snowman (guitar), and a blizzard of surprise guests …! Don’t let the snow keep you from drifting down Queen West ...to hear some lonesome sounds that will make you shiver in your socks, a flurry of ruckus raisin’ bluegrass, and sweet songs to melt your cold, cold heart. Plus a couple of Christmas numbers…!
… Don’t flake out at home just cuz the mercury’s falling! The show starts at 9pm, Pay What You Can..! 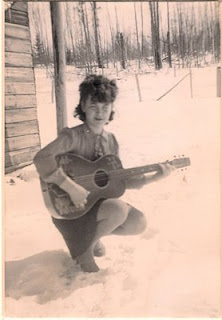 See you angels out there in the snow!
Allison