September is here and I'm back from a few more summer rambles before the new season settles in... only 38 more days until my October concert weekend with the Assembly Line; Friday, October 14th at The Bank Theatre in Leamington, Saturday October 15th at the Kordazone Theatre in Windsor!

Don't take a chance - get your tickets in advance online right on www.allisonbrown.ca on the right side of the page! ---->

The Assembly Line features Jedd House on Upright Bass, 'Uncle' Dan Henshall on Mandolin, and Vera Colley on Accordion & Harmony Vocals! Don't miss these special concerts featuring all your favourite songs, old and new!  Tickets for both shows are $12 in Advance, and $15 at the door. Physical tickets for the Kordazone Theatre are available at Levigator Press, Dr.Disc, and Nancy John's Gallery.  Stay tuned for details on when physical tickets are available for The Bank Theatre - in the meantime you can reserve by calling the Bank Theatre Box Office at 519-326-8805. 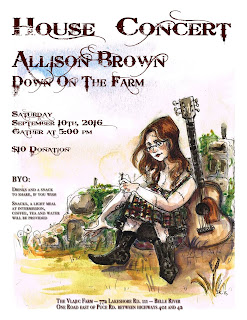 There are only 70 copies left of "Stitches And Incisions" - you'll be able to get yours along with Limited Edition Art Posters and Handscreened T-Shirts for $15.00 cash only at both shows!

Coming up in September I'll be doing a fun outdoor House Concert with The Assembly Line on Saturday, September 10th in Lakeshore down on the farm! - email if you'd like to attend; allisoncbrown@yahoo.com

Had a blast in August at Kingsville Folk Festival doing some MCing and a few workshops, another great show with Karen Morand at Pelee Island Winery, doing some songwriting up in Stratford with Dayna Manning and at Afternoons In The Alley with the DWBIA... and filmed a video for "Invisible Line" directed by Ian Foster that will be launched this fall!

Here's a few still shots from the video - right on Windsor's riverfront under the bridge!
Allison