Back from a great time out in Manitoba and aboard VIA Rail - gearing up for more adventures in August... and looking ahead at two big shows in October, at The Bank Theatre in Leamington and at The Kordazone Theatre in Windsor. Jodi Green from Levigator Press created limited edition hand-printed art posters especially for these two concerts. These posters will be for sale at both shows for $15.00, but if you'd like one ahead of the performance you can email me at allisoncbrown@yahoo.com and I can get one your way..!

Tickets for both shows are available online at:
http://allisonbrown.bandcamp.com/merch/allison-brown-the-assembly-line-friday-october-14th-the-bank-theatre

Don't take a chance - get your tickets in advance!

Coming up on August 12th weekend it's the 3rd Annual Kingsville Folk Festival..!  I'll be hosting the Creekside and Pillar stages on Saturday, and I'll be playing as part of the Willie P Bennett Tribute set on Sunday at 8:10pm on the Mainstage - don't miss it!

August 19th, I'm back on Pelee Island for a second show with Karen Morand at the Pelee Island Winery... join us for wine and pizza on their lovely vineyard! 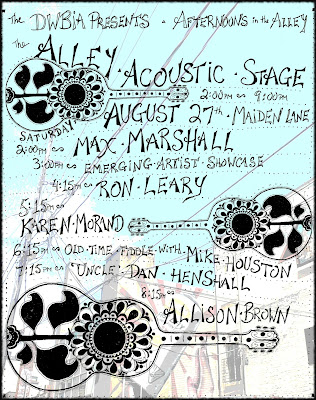 To wrap up August, plans are in the works for a video for "Invisible Line" that will be filmed in Windsor by Newfoundland songwriter and award winning filmmaker Ian Foster.... and the video for "Scavengers" is now up on my Youtube channel - check it out:
https://www.youtube.com/watch?v=DH2akhymru0

Lots of things cookin' as August rolls in.. here's a couple photos from our Manitoba adventures!
Allison