Wow... I can't believe we've already made it to Christmas Eve-Eve.. 2014 was the fastest year of my life, moving back to London, working at CHRW 94.9fm as Program Director and so many more highlights.  Playing at Hugh's Room for Michael Wrycraft's Two Sides Of Carole King, playing three great summer festivals (Home County, Pelee Island Unplugged and Kingsville Folk Festival), and second incarnation of the Antiques Freakshow among many other great times.

I wrap up the year with my annual FIRESIDE RADIO HOUR - this time two shows on two different stations.  I return tonight to reprise Border City Roots on CJAM 99.1fm in Windsor/Detroit - Tuesday, December 23rd from 6:30 to 8:00pm as I'll be broadcasting from my snow-covered cabin in the woods beside my crackling fire... and tomorrow night, Christmas Eve, I'll have a special pre-taped show on CHRW 94.9fm at 6:00pm.. tune in the whole night on CHRW for a special For The Folk family Christmas Eve where I pop in for a few songs! 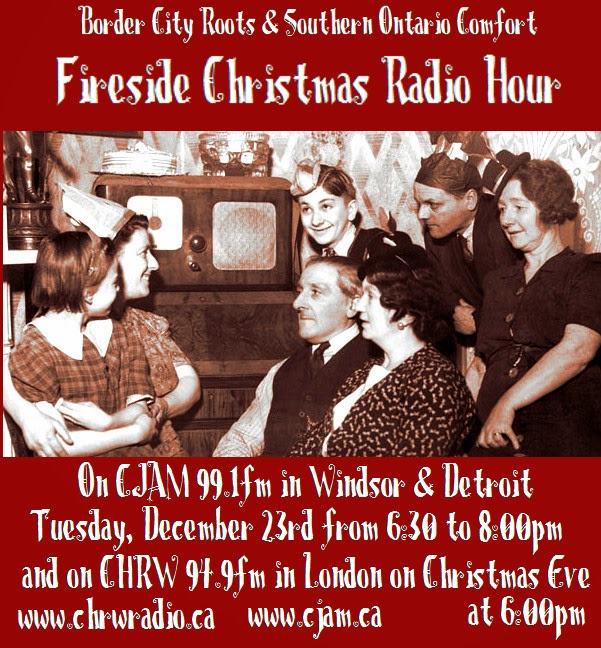 And naturally I've got some major plans for 2015 - including a Home Routes House Concert tour through Manitoba, a bluegrass festival in Owen Sound and my long-awaited visit to the East Coast of Canada!  And a new record by next summer - I promise.  The summer and beyond is booking up fast, so if you'd like me to play a house concert, or at a venue in your town please get in touch!

Merry Merry Christmas to you all and hope to see you in 2015!
Allison