Return Of The Blue Coupon

Such amazing times on Vancouver Island and aboard VIA Rail's "The Canadian" through the end of June and most of July as "Uncle" Dan Henshall and I made our way across the continent for ten great western shows in Vancouver, Sointula, Campbell River, Nanaimo (twice), Courtenay, Protection Island, Duncan and Victoria (twice in one day) and our grande finale on Pelee Island way in Ontario's southlands smackdab in the sorta middle of Lake Erie.  Thanks so much to everyone who helped us out on our way especially all the amazing folks who hosted us for sleep, food and house concerts and all you 'Wreckless' donors who helped us out with our sweet rental wheels from "Rent-A-Wreck"...! Couple tour pics are below...

And it's true - the "Secret" is out!!  I recorded four songs at Andy Magoffin's House of Miracles studio up in Cambridge this May and the tracks are up and ready to download from right here on my music page on allisonbrown.ca or on Bandcamp... these four new recordings will be included in an upcoming full-length release.  The physical CD version of "Secret Identity" features four 'hit' tracks from "Viper", as well as two live bonus tracks for a ten song collection.  To celebrate the ten year anniversary of my original 'blue coupon' included in my 2003 "Pizza & Beer" demo, I've revived the blue coupon and included it again in physical copies of "Secret Identity"...! Limited edition copies are available at Grooves in London, and at Red Cat Records in Vancouver. 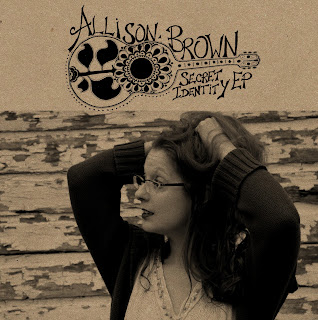 My August adventures keep me mainly at home in Southern Ontario, but I will be scooting up to Summerfolk to record a special feature for "Border City Roots" on CJAM... and I'm sure I'll be jamming at the campfires and on the open stage...
Coming up next on my concert calendar is the big Zurich Bean Festival in Zurich, Ontario on August 24th, catch our set at 1pm (With Uncle Dan & Jeff Kahl on bass), then stick around for the bean dinner and bean dance - if you miss it, you'll wish you would have bean there..!

Then later on September 1st, I'll be in Amherstburg for the Tall Ships Festival along with my pals Chris Crossroads and Vera Colley as a trio...

Here's a couple of tour highlights: